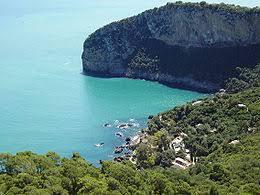 National Park of Gouraya is a natural reserve located in Bejaia province, Algeria, overlooking the Mediterranean Sea. It is full of picturesque beaches, vast green dense vegetation mountains and valleys emerging from the Atlas Mountains. The park receives 12 million people annually, especially during the summer, due to its presence on the shores of the Mediterranean, and UNESCO designated it a global nature reserve in 2004.

Mount Gouraya, from which the park derives its name, is 660 meters and takes up most of its area, and varies with flora and fauna, including the presence of the Barbary macaque monkeys, which is a local animal in this park, and the golden jackal that exists throughout the park.