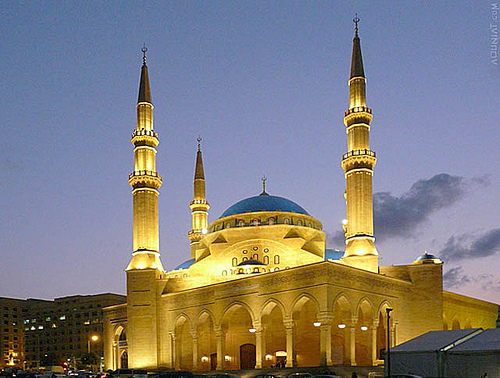 • Muhammad Al-Amin Mosque in Beirut is located in Martyrs’ Square in the downtown of the Lebanese capital, Beirut. It is considered one of the largest and most luxurious mosques in Lebanon and can accommodate about five thousand people. The history of the mosque goes back more than a century and a half.

• The mosque was initially established as a Sufi zawiya in 1853 AD that had the name “Zawiya of Sheikh Muhammad Abu al-Nasr” (born in 1801), as the Ottoman Sultan Abd al-Majid (1839-1861) granted a plot of land to the Sheikh in appreciation of his religious efforts to establish zawiya for worship, religious education. Later, the sheikh transformed the zawiya into a small mosque that had the name (Muhammad Al-Amin) in relation to “the Messenger of God Muhammad, may God bless him and grant him peace.”

• In the middle of the twentieth century, the idea of expanding the mosque arose and donations were collected for this purpose, but the civil war in the country postponed the project indefinitely. In 2002 AD, the foundation stone for the construction of the current mosque was laid on the ruins of the old mosque by the late Lebanese Prime Minister "Rafik Hariri".

• The total building area of the mosque which is overlooking Martyrs' Square and Prince Bashir Street is 10,700 square meters distributed over four layers. It has domes painted in azure blue, and four minarets that can be seen from several areas in Beirut. It was designed in the Ottoman and Lebanese style, while the decorations and architectural details are based on the Mamluk's style and the ceilings were decorated with huge crystal chandeliers.

• Near the mosque is the tomb of the Lebanese Prime Minister, "Rafik Hariri," who was assassinated in an explosion targeting his motorcade on February 14, 2005.