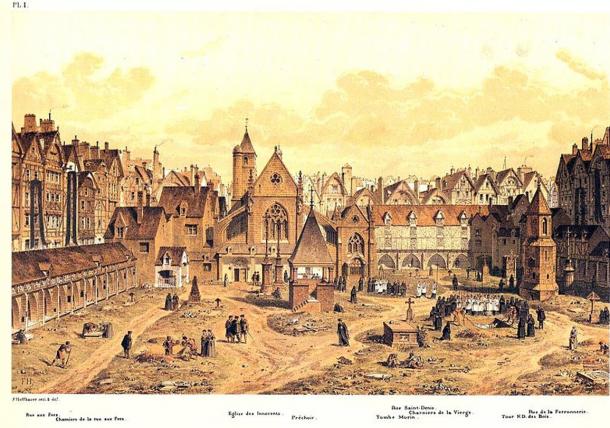 The Catacombs of Paris

The Catacombs of Paris

• The Catacombs of Paris  are underground ossuaries in Paris, France, which hold the remains of more than six million people. It has the largest number of remains collected together in one place in the world.

• The Catacombs are 20 meters deep under the buildings and streets of Paris extending in long network of tunnels.

• Back in the Roman era they built quarries, as they used to construct buildings to contribute to the expansion and growth of buildings.

• In the late 18th century, burial grounds expanded and reached the city. The Parisian cemeteries were filled to overflowing i.e. Les Innocents cemetery. This led to the spread of inappropriate burial and the appearance of open graves with uncovered bodies.

• People began to complain about the rotten smell of body remains coming out of cemeteries, and epidemics and diseases had spread. In 1763, King Louis XV issued a decree, which forbade burial in the city, but the church opposed the execution of the decree because they did not want to evacuate the cemeteries or even move them; the cemeteries remained as they are.

• It was not until 1780, unexpected heavy rains caused the collapse of the "Saint Innocents” cemetery. As a result, the bodies were rotted and decomposed, and French authorities had to take a quick decision about it.

• Starting from 1786, they worked on the mines and quarries to transform it into catacombs. It took almost two years to transform all the bones from the "Saint Innocents" to the "Catacombs"; the bones of the dead were removed from all other cemeteries around Paris to be buried in the catacombs.

• After the French Revolution, they used to bury in the catacombs. The last bone transfer took place in 1859, when Georges-Eugene Haussman was re-designing the French capital. The work was completed in 1860, and the catacombs became open to public visitation; It is 300 km of tunnels.

• In 1970 and 1980, a group of cultural guerrilla discovered the crypts illegally. The underground quarries had been restored. One of the caverns were completely renovated; they even made a fully equipped movie theater and a complete restaurant with tables and chairs.

• The group used it as a hideaway after it was a place to bury the dead in the eighteenth century.

What to do in the Catacombs

• First, You will have to go down a long stairway of about 83 stairs. Visitors are allowed to discover a restricted area about 1.7 km long. When you get there, you can easily see skulls and bones arranged in an orderly way. You can walk through the crypts and narrow passages to see the huge amount of remains stacked on top of each other.

• You can also go on group tours or guided tours; as guides would explain the history of these basements, how and why the remains were moved, how the remains were arranged in this way and many information about this wonderful place.

How to get there