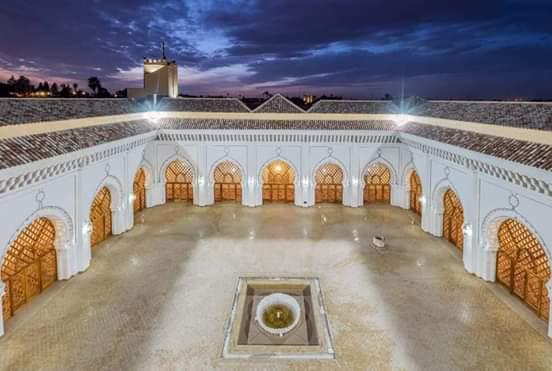 • The "Al-Shurafa mosque" or "Mawassine Mosque" is located in the heart of the old city in the Mouassine district, near the traditional markets. It is one of the great mosques in the city of Marrakesh, although it does not have a high hermitage.

• A religious complex was built with it, containing a large well-known water fountain, a spacious fountain with its own door, and one of the most famous baths in the city. It contains a men's section and a women's section with a special suite for brides, and a residence for those in charge of the affairs of this mosque.

• It is known about the mosque that it is a subject of controversy among the public because there is a cemetery for the Jews in one of its corners, which some Western sources refer to. On one of its outer walls appears an arch called the “Judea Tower.” It differed in its reality as to whether it is a cemetery, as the Jews think, who avoid passing near the mosque until now, or a temporary home for the mosque.